Home > Blog > Xenon vs LED Headlights: What is the Difference?

Xenon vs LED Headlights: What is the Difference? For quite some time, halogen bulbs were the industry standard in headlights. However, as we’ve explored different technologies and refined our designs, different types of bulbs have cropped up. Now, we see two more contenders for the top spot: Xenon HID and LED headlights.

Today, we will look at these two different headlight alternatives and their history, compare their differences, and see if there is a definitive best between the two.

The HID headlight was the first option to start to break the halogen bulb’s winning streak. These bulbs have some significant advantages over the halogen that have made them quite popular. However, it somehow remains unheard of despite its common use nowadays.

This process starts ionizing the xenon and sends the current between twin electrodes, which causes the temperature to rise and the metallic salts within to vaporize. This, in turn, brings the resistance down between the electrical arcs and is then maintained by the engine’s power.

The result is a bulb that generates over 3,000 lumens and a 90 mcd/m2 powered by a typical 35-watt ballast. This is more than twice as much compared to the older halogen bulbs. In layman’s terms, this makes the xenon headlight much brighter than the halogen, with a longer lifespan and more efficient use of energy.

The light produced has good range and coverage, and it is, in fact, the brightest light compared to both halogen and LED headlights. The light is a crisp, clean white and provides even illumination across its spread. However, one of the most significant flaws with HID Xenon headlights is that they can be exceedingly bright and even glaring depending on how they were installed. If not installed properly, it can become a danger to other drivers.

LED headlights go through a very different process to produce light. Negative electrons run against holes in the semiconductor to create light through a light-emitting diode - or LED, for short. When the electrons enter low-energy holes, photons are then released through a process known as electroluminescence, which happens thousands of times every second to create that consistently bright light that we associate with LEDs. 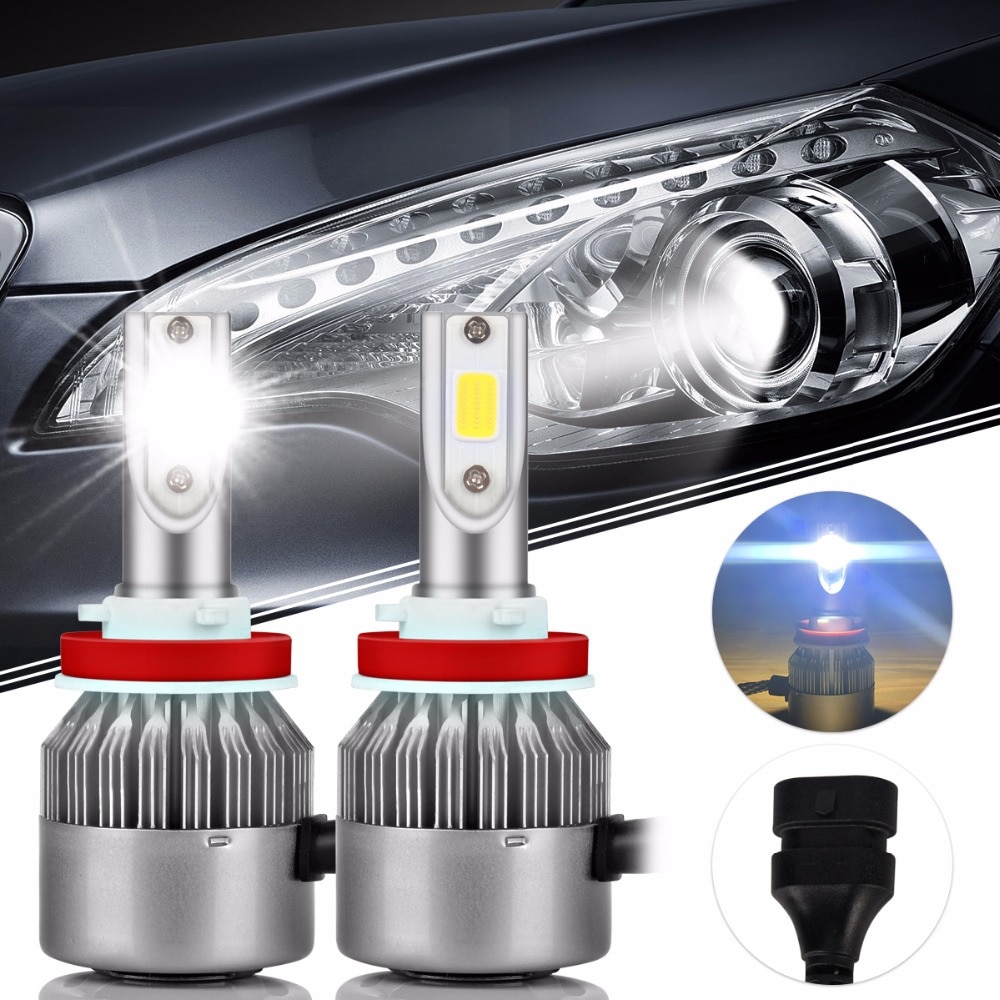 Compared to HID Xenon headlights, LED headlights provide a similar light, though it is not as bright or far-reaching. However, if you’ll remember what we mentioned at the end of the Xenon lights description, they can be exceedingly bright and can possibly blind other drivers. For this reason, many consider LEDs to be the best choice, as it gives you an outstanding balance between brightness and efficiency without going overboard.

The most significant flaw of LEDs is their need to be cooled continuously, as well as their side-effect of causing surrounding components to heat up, too. LEDs on their own are quite costly, but with the added need for cooling, their price can begin to ramp up depending on how well-installed you want your headlights to be and how efficient you want your headlights to run.

Comparing the Advantages and Disadvantages

HID Xenons are the brightest between the two, with the furthest reach and broadest area coverage. The light is white and crisp and lasts for quite a long time. Its greatest strength is its illumination, which is also its biggest weakness, as this brightness produces a fierce glare that can cause accidents and problems on the road.

In comparison, LEDs are not as bright as Xenons but are still reasonably bright. Their capabilities can be viewed a step below Xenons in many ways, except in energy efficiency. LEDs are unmatched in energy consumption and efficiency, with their only real weakness being their tendency to heat the area around them.

To conclude this Xenon vs LED Headlights: The Difference guide, LEDs are probably the best choice, as they are the most balanced option. The heating issue is something that can be dealt with through clever installation.

Xenons are potent tools that are more one-trick ponies that are best if you are only concerned with getting the brightest light possible. If you want a more balanced option that will provide a more conservative but still effective option, then you’ll likely want LEDs, as they are generally the superior option overall.